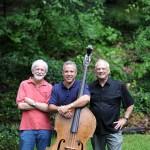 Join the Birmingham Boys Concert Choir as they perform with THREE ON A STRING, on Sunday, March 5th at 4:00 pm at the First Baptist Church of Trussville, Alabama. This Collaboration will include performances by the BBC conducted by Ken Berg. The famous local musicians, Three on a String will entertain the audience with the magic of their music! The concert will conclude with special selections to include these talented men, (young and not quite young), singing all together! Plan to attend and be prepared for a very entertaining event.

Three on a String is a long-lived bluegrass trio. The group was founded in 1971 by anjo player Bobby Horton, guitarist Jerry Ryan, and bassist John Vess.
Horton and Ryan first played together at Horse Pens 40 in 1970 while both were students at Samford University. George Pruett suggested that they find a bass player and, with Ryan, they began bringing their unique bluegrass-folk-comedy performances to Birmingham audiences. Their debut was at the Lowenbrau Haus in Homewood and that became their regular home for the next two decades.
After the Lowenbrau closed Three on a String had a year-long stint at the Cadillac Café in Southside, then returned to Homewood for seven years at the Stage Door.
The band has rotated through numerous bassists, none of whom were experienced on the stand-up bass fiddle before joining the band. Among them were Joe Estes, Shelton Harden, Andy Meginniess, Terry Ryan, Gordon Burt, Mark Weldon, Rowdy Yates, Dick Wilson and Brad Ryan (Jerry’s son). The group has also welcomed additional instrumentalists for particular recordings or shows.
Throughout their existence, Three on a String have acted as ambassadors for Birmingham, playing for two presidents and with nearly a dozen symphony orchestras. Introducing each show with “We’re here to have fun!”, they pepper the act with comedic banter and even occasional skits. They have made numerous television appearances, including several for Tom York’s “Morning Show” and have been inducted into both the Birmingham Record Collectors Hall of Fame, the Alabama Blue Grass Hall of Fame, and the Alabama Music Hall of Fame.